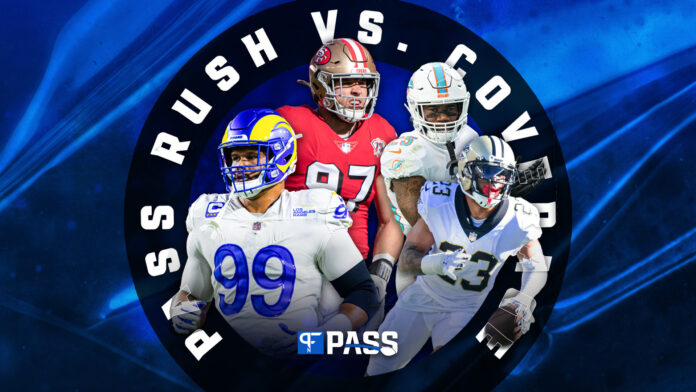 The argument over whether pass rush or coverage is more important ravages the streets of football debate. It’s endlessly complex, and that complexity leads to a never-ending debate as the game evolves. While league decision-makers certainly aren’t the end-all, be-all, there’s a good reason pass rushers are paid significantly more than cornerbacks, even though coverage is king.

In fact, more interior defenders make $20 million annually (four) than cornerbacks (three). And when we add safeties into the mix, Minkah Fitzpatrick’s freshly-inked contract is at the top of the ladder at $18.4 million.

So while coverage is king, a pass rush is more stable year over year, both on the player and team level. On a unit level, does it matter whether a team pays a large sum to defensive linemen versus defensive backs?

Over the past five seasons, teams ranking in the top 10 of defensive line spending have gone a combined 439-370-2. Meanwhile, teams that held the same top-10 ranking paying defensive backs finished 424-383-2.

But unfortunately, that’s not enough to declare paying the defensive line as a unit in order to build a roster. The median offensive ranking for teams paying defensive linemen was 13, while the average was 14.54. The offenses paying defensive backs finished with a median of 16 and an average of 16.4. So most likely, the offense played a more significant role in the win discrepancy.

To steal an old, rather graphic, small-town saying, there is more than one way to skin a cat.

The Baltimore Ravens and Minnesota Vikings showed up four times in the five years, paying a top-10 rate for defensive backs. Likewise, the New England Patriots are famous for paying defensive backs and scraps for defensive linemen. Bill Belichick’s team was on the list all five seasons.

Meanwhile, the Tampa Bay Buccaneers and Green Bay Packers like to spend on the defensive line instead. The Buffalo Bills have also made the list in each of the past three seasons. But their script flips in 2022 as they’ve drafted the defensive line heavily over the past few seasons while paying Tre’Davious White and Taron Johnson and having the best safety duo in the NFL.

The Buccaneers are an interesting group, particularly from 2017 to 2019. They won five games in 2017 and 2018 while paying defensive linemen at a top-10 rate. They ranked 29th and 30th in defensive EPA/play in those seasons, respectively. Tampa Bay only finished 7-9 the following season, but they finished with the sixth-ranked EPA/play.

Well, in 2018, the Buccaneers drafted Carlton Davis and Jordan Whitehead. They followed that up in 2019 with Devin White, Sean Murphy-Bunting, Jamel Dean, and Mike Edwards. While White isn’t specifically a coverage player, he is a piece of the overall puzzle, even if his best attribute is as a pass rusher. Tampa Bay completely overhauled their DB depth chart with picks in the top four rounds of the NFL draft.

While purely anecdotal, the Buccaneers showed the playbook for building a defensive front with paid veterans while throwing inexpensive darts at youthful defensive backfield talent. That was a good team held back by the offense, and the addition of Tom Brady the following season proved as much.

In late October 2021, Football Outsiders’ Aaron Schatz wrote that Aaron Rodgers, the league’s eventual MVP, was the worst QB in the league under pressure at the time. His QBR under pressure was 2.5, compared to his league-leading 83.6 when the rush wasn’t in his face.

First, it’s far easier for a QB to complete passes when he’s kept clean. Secondly, performance under pressure has far more variance overall. So teams should try to throw money and draft capital at pass rushers to get pressure on the QB as often as possible, right?

As Lee Corso would say, “Not so fast, my friend!”

In 2021, the Bills led the league in pressure rate, followed by the Buccaneers, Dolphins, Cowboys, and Chiefs. Four of those teams were top-10 defenses in EPA/play.

The problem is when teams can’t get pressure on the quarterback. In the four seasons Pro Football Reference has tracked pressure percentage, the highest was the 2020 Pittsburgh Steelers at 35.1%. And only four teams over that span have a 30% rate or higher in a given season.

So, your defense still has to cover over 70% of dropbacks with far more stable QB play. And a good pass rush can be game-planned for and stifled by a good quarterback who can quickly get the ball out of his hands.

The third installment showed that the relationship (at least in 2019) between time to throw and pass-rush grade was more strongly correlated than coverage grade and time to throw. However, the argument isn’t as definitive as running backs not mattering.

In theory, a pass rush forces the ball out more quickly, while coverage forces a QB to hold onto the ball longer. That’s why in a perfect world, winning with four pass rushers while dropping seven into coverage is the best of both worlds.

There’s no better example of that from last season than the San Francisco 49ers’ win over the Dallas Cowboys in the Wild Card round. Nick Bosa, Arik Armstead, D.J. Jones, Arden Key, Samson Ebukam, and Charles Omenihu racked up 14 hits and five sacks on Dak Prescott, who finished the contest with a 27.3 QBR.

Prescott finished with a 35.2% dropback success rate and a CPOE of -9.5. His success rate during the regular season was 49.6%, and he had the seventh-best CPOE at 2.3 (metrics courtesy of rbsdm.com).

While San Francisco only finished with the 17th-ranked EPA per play last season, they ranked ninth from Weeks 10-18 and went on an absolute tear in the playoffs. In those final nine regular-season games and three playoff games, the 49ers allowed just 17.3 points per game and sacked the opposing quarterbacks 42 times.

Only the Raiders, Eagles, and Texans blitzed more infrequently last season. So, despite having to play a spin-cycle Josh Norman, Emmanuel Moseley, and rookie Ambry Thomas at outside cornerback, they thrived defensively because they could get pressure with four consistently.

But that’s not the only reason. Jaquiski Tartt and Jimmie Ward are a versatile safety duo. And when we look at good defensive outcomes, it’s hard not to see a possible relationship between good safety play and good production.

Elite cornerback play can come and go quickly. Stephon Gilmore was still good in Carolina in the short time he was healthy. But he wasn’t nearly the best cornerback in the league. Aside from Jalen Ramsey and Marlon Humphrey, it isn’t easy to continuously be productive at the position without top-shelf safety play behind.

That is where investments can be made in the secondary while still paying pass rushers. There is a market inefficiency at safety because the league doesn’t value their impact. It’s also one of the most saturated positions in the NFL with talent. And good safeties remain at their level longer than cornerbacks.

Last season’s playoff teams are a great example of how vital safety play is. Tennessee somehow maintained the top seed in the AFC, and arguably, their two top defensive performers were Amani Hooker and Kevin Byard. The NFC-leading Packers boast Darnell Savage and Adrian Amos. They played 13 regular-season games without Jaire Alexander in the fold.

Second-seeded Tampa Bay had Jordan Whitehead and Antoine Winfield Jr, while the Chiefs had Tyrann Mathieu and eventually Juan Thornhill, who played well after supplanting Daniel Sorensen on the back end. Dallas, meanwhile, found lightning in a bottle with Jayron Kearse, and Buffalo has arguably the best safety duo in the NFL.

Nine of the top-10 defenses in EPA/play had at least one safety rank in the top 20 of PFN’s top 32 safety rankings. The Patriots were the only team not in the top 20, but they have three safeties ranked between 22-31.

But balancing resources and trying to avoid weak points is what building a defense is all about — for example, the Las Vegas Raiders and Philadelphia Eagles.

When looking at PFF’s pass-rushing grades, albeit subjective, the Raiders and Eagles ranked fifth and sixth, respectively. The Raiders only blitzed on 12.1% of dropbacks, while the Eagles brought five or more on 16.4% of dropbacks, the two lowest marks in the league.

You might be saying, “This is ridiculous; the Eagles only had 29 sacks in 2021, the second-worst mark in the NFL!” And you would be correct in that the Eagles didn’t sack the quarterback often in 2021. But PFF wasn’t the only fan of their pass-rushing performance. ESPN’s pass rush win rate ranked them fourth with a 49% team win rate, and the Raiders ranked eighth at 44%.

Yet, the Eagles were 17th in defensive EPA, with the Raiders finishing 25th. Both teams made significant changes to their defensive rosters heading into 2022.

Philadelphia spent significant resources on both the line and in the backfield with the additions of Haason Reddick and James Bradberry, along with Georgia’s Jordan Davis.
Las Vegas traded Yannick Ngakoue for Rock Ya-Sin and signed Chandler Jones to rush opposite Maxx Crosby.

But even the top names like Marshon Lattimore, Xavien Howard, and Tre’Davious White have had ebbs and flows on a season-to-season basis without changing teams.

The NFL makes it incredibly difficult for a cornerback to do their job consistently. Illegal contact, holding, pass interference, and the complete disregard for offensive pass interference make it almost impossible to play the position at a high level. There are fewer variables on the defensive line, which is why most teams are more comfortable building that way.

From a team-building perspective, it’s safer to pay the pass rushers. But don’t let that twist you into a pretzel; if your team can’t cover, it’s darned hard to be successful defensively. So spend premium draft capital on defensive backs, sign safeties, and throw darts on perceived “scheme fits” at cornerback in free agency.