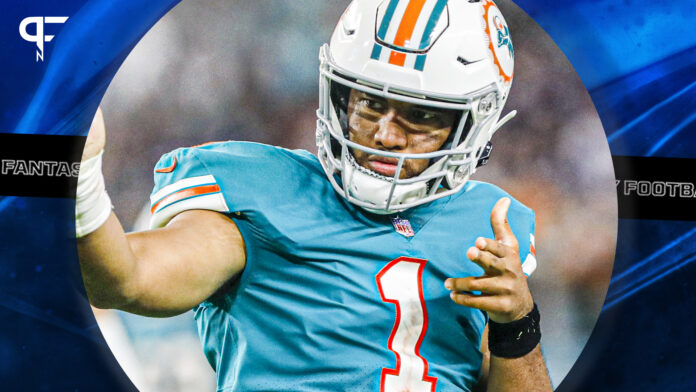 A rookie QB with sky-high potential. An oft-injured bell cow still in his prime. A veteran WR with a tenuous grip on the No. 1 job.

In the final days before the beginning of the 2021 season, the PFN Facebook Page unveiled its final list of chaos players to hundreds of subscribers. At QB, we presented Dak Prescott (QB6 ADP) and Jalen Hurts (QB12) based on their elite potential, as well as doubts about their A) durability (Prescott) or B) passing ability (Hurts). Prescott finished the season as the QB8 in points per game.

He could have been elite if Dallas hadn’t utilized him so conservatively in the running game (presumably to help limit his reinjury risk). Meanwhile, Hurts shined as one of the game’s top dual threats, though his continued challenges in the passing game kept him outside the top five.

At running back, we promoted Saquon Barkley (RB9 ADP) and Raheem Mostert (RB29) as chaos players. A healthy Barkley could return to elite form, while a healthy Mostert could certainly keep his starting job for at least most of the season. However, Barkley’s downside based on recent injury history was abundantly clear, while Mostert’s advanced age and injury history made him a significant reinjury risk. Huge risks and huge rewards. And for both players, injuries once again turned them into fantasy busts.

At wideout, we highlighted DJ Chark (WR38) and Will Fuller (WR44) as quintessential chaos players. Chark had the talent to thrive as Trevor Lawrence’s No. 1 receiver, and he played the part in the first three games. Because of his season-ending injury in Week 4, we’ll never know how this might have played out. As for Fuller, we all knew how good he could be if healthy, just as we knew how unlikely he was to remain healthy.

And at tight end, we labeled Kyle Pitts (TE4) and Robert Tonyan (TE9) as chaos players. Pitts had elite potential even as a rookie. But would he get enough scoring opportunities in a subpar offense, and how would he perform alongside No. 1 WR Calvin Ridley? While Pitts’ future remains as bright as any TE, he was merely No. 11 at his position in fantasy points per game.

When Ridley stepped away from football, Pitts’ catch rate and yards per game plummeted, as defenses could now focus more on stopping him. Meanwhile, Tonyan’s extraordinary chemistry with Aaron Rodgers in 2020 turned out to be a blip — not just because Tonyan missed more than half the season. While his target per game remained constant compared to the year before, the quality of his targets weakened as he settled for more short passes in an offense that regressed from No. 1 in scoring in 2020 to No. 10 in 2021.

Every player outcome tells many stories. And to an extent, every player is a chaos player. But some have much wider ranges of outcomes than most other players. They can make or break a fantasy season depending on how much risk we can tolerate and whether such risks are rewarded.

The following eight chaos players easily could go either way.

There are many reasons to question whether Justin Fields can take a Year 2 leap after (too often) losing starts to Andy Dalton as a rookie. He could certainly finish the year among the bottom 10 fantasy QBs (or even the bottom six). With Darnell Mooney and likely Cole Kmet serving as his two best pass catchers, this might be the least-talented receiving corps in the league.

And yet, there’s clear breakout potential, even if the Bears aren’t certain that Fields is their QB of the future. The young signal-caller finished last year strong, with four 16.9-plus-point performances in his final five games, including against some relatively tough defenses (the Niners, Steelers, and Packers). Velus Jones Jr. and Trestan Ebner are intriguing playmaking rookies. Certainly, there’s top-10 potential if he picks up where he left off in 2021.

Would anyone be surprised if Tua Tagovailoa continued to struggle? Last year, among regular starting QBs, he was 21st in fantasy points per game at his position alongside Jared Goff and Taylor Heinicke. For context, Teddy Bridgewater and Daniel Jones performed better. Even with Tyreek Hill, the question is whether Tagovailoa has what it takes to be anything more than middling — or, as we’ve seen thus far, sub-middling.

Hill is the X-factor in all this. We know what Jaylen Waddle means to this offense, and by extension, to Tagovailoa. But the addition of Hill creates a “what if” fantasy ceiling that’s much higher than Tagovailoa’s ADP. This young QB now has Hill and Cedrick Wilson instead of DeVante Parker and Mack Hollins. He finally has a running game that isn’t among the league’s worst. If he can put it all together, Tagovailoa could be a weekly fantasy starter.

His lofty ADP doesn’t reflect it, but Christian McCaffrey is the ultimate chaos player. After a career-defining breakout 2019 campaign, he’s missed 23 games in the last two seasons. His realistic floor almost certainly is around the RB30-to-RB40 range, assuming he can suit up for about half a season. It’s quite possible the going-nowhere Panthers will moderate his usage, which seemed limitless in 2019 and early 2020. If he earns “only” 300 touches instead of the 403 he enjoyed three seasons ago, he’ll be a long shot for top-three RB numbers. And if he comes in at a more reasonable 250 touches — including a reduction in passing-game usage — he might not crack the top 14.

On the flip side, we’re talking about a 26-year-old on a team that lacks assured offensive talent beyond DJ Moore. Sam Darnold thrived (yes, thrived) early last season before McCaffrey got hurt. Whether he or rookie Matt Corral is at the helm, the Panthers could be forced to lean on their all-world RB. Yes, he still has uber-elite potential. Do we think it’s likely? Of course not. But if you’re spending an early first-round pick on him, you’re banking on someone with a demonstrated ceiling as high as any RB’s.

Last season, Javonte Williams split carries with veteran Melvin Gordon. This year, the fantasy world is watching and waiting to see if Williams can shine on his own. In a worst-case scenario for his fantasy upside, Gordon will continue to split carries, keeping Williams around the 210-230 mark. Denver would have many good reasons for doing this, including not wanting to overwork their young back as this team makes a strong push for a playoff spot (when they’ll need Williams more than ever).

However, we could envision a Gordon regression contributing to a rising Williams ceiling. Last year, Gordon earned his best broken tackle rate since 2018, contributing to his third-most-efficient rushing season. Is that sustainable? Probably not. He out-touched Williams 44-35 in the red zone. Is that sustainable? Probably not. There’s a path for the ascending Williams to take a significantly larger share of the workload from the (soon-to-be?) fading Gordon. If he does, Williams could be a top-five RB.

Last year, Mike Williams finally put it all together after four seasons of good-not-great fantasy production. A cynic might say he was playing for a big contract. If that’s true, we might expect a regression. But it’s probably more complicated than that. The ascending Joshua Palmer and a (somewhat) beefed-up backfield could make Williams more boom/bust than his ADP suggests. And hey, he was fairly boom/bust last year, except his booms were through the roof, while he scored less than eight fantasy points seven times. A little less boom this year could put him back in the top-35-to-45 range.

Or, we might wonder if Williams is poised to replace the 30-year-old Keenan Allen atop the WR depth chart. Allen didn’t have any games with 23+ fantasy points. Besides his one-game 2016 campaign, that marked the first time in his career Allen hadn’t cleared that plateau. In fact, he’d cracked 30 points at least once every season (except in 2016). Perhaps this is a changing of the guard. If so, Williams could build off his overall WR12 numbers from last season.

No one knows what any player will do in any season, and no player exemplifies this confusion better than Michael Thomas. Two years ago, he was coming off one of the greatest WR campaigns in history and was a common first-round draft pick, normally reserved for can’t-miss WRs in their prime. However, Thomas hasn’t looked right since, and he’s played in only five games (none last season). He no longer has Drew Brees, one of the greatest WR enhancers of all time. And he’s now in the most crowded receiving corps of his career. Would anyone be surprised if Thomas didn’t finish among the top 40 overall WRs?

At the same time, we’re left wondering how someone like Thomas could fade from view, particularly if he returns to 100% by Week 1. He opened his career with four straight dominant campaigns, each more impressive statistically than the last. Does that talent vanish? Is he really going to play second fiddle to rookie Chris Olave and Jarvis Landry? Perhaps. But a healthy Thomas has proven he can do what most WRs cannot. And that alone keeps his ceiling far above his ADP.

Like the team he plays for, Logan Thomas is at a crossroads. He might start the season on the injured reserve. At 31 years old, he’s likely not getting better, and competition behind him (specifically John Bates and Cole Turner) could push for a co-lead role. And while he’s signed through 2024, the team has a fairly reasonable out after this season if they choose to move on. Essentially, he’s a talented TE with a dim future as Washington’s No. 1 TE.

However, we can’t ignore the fact that he’s only two years removed from a breakout campaign. He played just as well last year (on the field and fantasy-wise) in five full games. Even a half-season of Thomas could be better than half of the NFL’s starting TEs. In other words, there’s a path for a return to weekly fantasy value … when he plays. As a result, few starting TEs have a range of outcomes as wide as Thomas does.

Rob Gronkowski’s retirement opens the door for Cameron Brate to reclaim fantasy relevance he hasn’t enjoyed since 2017. Standing in his way are A) rookie Cade Otton, B) every other Tampa Bay receiver, and C) sure, every Bucs running back, too. Entering his age-31 season, Brate won’t be the No. 4 or No. 5 or perhaps even the No. 6 offensive option (in a realistic worst-case scenario involving two active RBs, three active WRs, and Otton).

And yet, Brate has experience on his side. He’ll be one of a handful of seemingly undraftable fantasy TEs who could make noise as a weekly streamer in a high-powered offense that should yield plenty of scoring opportunities. In fact, Brate tied for second last year in TE red-zone targets. He has a realistic eight-TD ceiling, which could catapult him into the top 12 if he earns (and keeps) the No. 1 TE job.