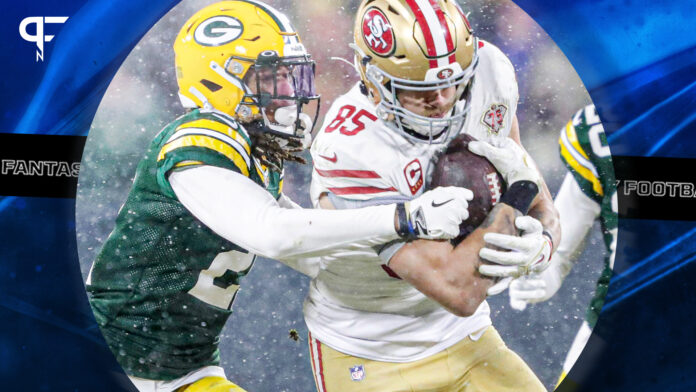 Average draft position has become a go-to tool for millions of fantasy managers. But it contains two fatal flaws. First, it’s only a two-dimensional solution to a far more dynamic three-dimensional problem. Second, it’s based largely on a combination of the previous year’s stats, experts’ rankings, and a herd mentality that drives managers to accept ADPs as useful benchmarks.

Regarding the first flaw, rankings are most useful when they’re based not on static positioning (RB5, QB8, etc.) but on high-probability ranges of outcomes. Alexander Mattison might be a perennial RB4/5.

Nonetheless, his ceiling is much higher than your typical RB4/5 because he’s always one Dalvin Cook injury away from being a top-16 RB. Two-dimensional rankings cannot distinguish between Mattison’s floor and his ceiling. Three-dimensional rankings empower us to play the probabilities that most align with our fantasy approach – for example, high floor / low ceiling (boom or bust) vs. low floor / high ceiling (safer).

Regarding the second flaw, ADP is a social construct that’s bolstered by circular reasoning. Early offseason rankings frequently apply the previous season’s statistics as a baseline for projecting next season’s numbers. Then, many experts use existing early ADPs to help formulate their own ADPs. That’s why so many expert ADPs are similar, particularly among the top 20-30 players at each offensive position. Consequently, because most people draft online and most online sites pre-populate their players based on ADP, many managers fall into the trap of picking the “next best” player available.

PFN has devoted thousands of hours to analyzing various angles spanning ADP’s relationship with actual fantasy production. This research has reinforced what we’ve known for some time: ADP is a tool but should not be one’s primary tool. If you draft based on ADP, you’re just as likely to swing and miss as you are likely to connect. And in the early rounds, those misses can set you back – way back.

Regarding the following charts on top-five and top-10 players based on ADP since 2015, we can observe:

49% of top-five-ADP TEs have finished in the top five, which at first glance places them at a clear advantage compared to top-five-ADP QBs (37%) and RBs (31%), and they have a small advantage over the top-five-ADP WRs (46%). But digging deeper, we find that seven times – or once per season, on average – a top-five TE has failed to finish in the top 20. In fairness, injuries impacted all of the severe underperformers. However, injury risks must be factored into fantasy values.

By contrast, only four preseason top-five QBs finished outside the top 20. In three of the four cases, significant injuries derailed their otherwise brilliant partial seasons.

Meanwhile, 10 preseason top-five WRs finished outside the top 20. But since WRs are a much deeper position than QBs and TEs, with a fantasy universe 2x to 3x larger, we have to take into account the value of a WR25 compared to a TE25 and QB25. In other words, while a preseason WR5 who finishes as a WR25 would be considered a “bust,” a QB5 or TE5 who finished at No. 25 would be considered a disaster.

So, if we consider a WR40 just as streamable as a QB20 or TE20, it’s helpful to understand that only six preseason top-five WRs finished outside the top 40. With that added context, we should consider not only that top-five ADP TEs are more consistently elite compared to other top-five positional players but also that top-five-ADP WRs, in particular, offer relatively solid floors.

Frequently, injuries have been the culprit. Rarely do elite fantasy RBs lose their starting jobs during the season (unlike many back-end RB starters). But the fact is, RBs are significantly higher injury risks than all other skill-position players.

Why is this happening? We can delve into this more in the future because there’s a lot to unpack, and PFN has enough research and analysis to fill a book. But the short answer is this: the fantasy market, the deliberate and organic creators of ADPs, tend to push the best previous-season performers to the top of the ADP rankings. When it comes to RBs, those top performers often have been overworked. A comprehensive collection of PFN research shows there are dramatic regression rates for overworked RBs.

These results jump off the page. If you’re looking for “safe” value in a draft, look no further than a top-10 ADP QB. Yes, there are many exceptions, as evidenced by the 43% of preseason top-10 QBs who don’t hit this range. But if you’re playing the percentages, it’s hard to ignore the relative security found with top-10 preseason QBs compared to their RB, WR, and TE counterparts.

It appears there are smoother value gradations among the top 10 at other positions. For example, a QB3 and QB6 might be relatively interchangeable some years – the same goes for RB5s and RB8s.

But with WRs, we might be seeing a clear distinction between “the elites” and the rest. The fantasy universe often has a pretty good understanding of what constitutes an elite preseason WR. Nonetheless, the market has been much less successful in identifying which WRs should follow.

No, we didn’t forget about kickers. But we recognize most of you (justifiably) aren’t thinking much about field goals or extra points. PFN’s kicker analyses run surprisingly deep, and this chart offers a snapshot of what we’ve learned.

Essentially, how often have you been thrilled – in hindsight – with the kicker you drafted? There are no absolutes in fantasy, and occasionally a kicker comes along (Justin Tucker, for example) who is money in the bank year after year. But those cases are rare.

This reality reinforces the importance of drafting a kicker last in all but the most unusual cases. It also requires that we assess kicker fantasy values differently; some of these new ways of thinking can be viewed later in this draft kit.

(5) Top-five-ADP D/STs have been the least trustworthy top-five positional players.

If you drafted a preseason top-five D/ST anytime since 2015, you had a 26% chance of securing top-five value. The odds of landing playable top-10 value from the preseason top-10 pool? 50%.

Let’s focus most on the first chart. In some leagues, elite D/STs come off the board three, four, or even five or more rounds before the end. This strategy has consistently led to failure. As always, there are exceptions (there always are). But we can’t allow exceptions to dictate strategy any more than we should allow a winning lottery ticket to prompt us to invest all our money in lottery tickets.

Seems so obvious today, doesn’t it? Yet, each summer, millions of managers make the same mistake by overvaluing supposedly elite D/STs. In the future, we’ll share some reasons why the market keeps making these mistakes, including the frequent randomness (and disproportionate impact) of D/ST touchdowns on D/ST point totals. But we’ll save that breakdown for another day.

This summer, it might be hard to fade seemingly elite D/STs like the Bills and Bucs. And let’s face it: it’s easy to see how the Bills’ defensive unit could absolutely crush it in fantasy. Again, there are always exceptions. But seven years of historical data is hard to ignore. Supposedly elite D/STs have significantly underperformed more often than not. If you’re playing the probabilities, focus on week-to-week value, beginning with the first two weeks of the season. Then, reassess and repeat until you’ve found a D/ST that’s well-positioned to return top-five value going forward.

Most times, research nibbles around the edges. There are very few “A HA!” moments when testing fantasy hypotheses. Assessing probabilities for picking up one point per week here, another point per week there … it all adds up. But it takes time to arrive at concrete conclusions. 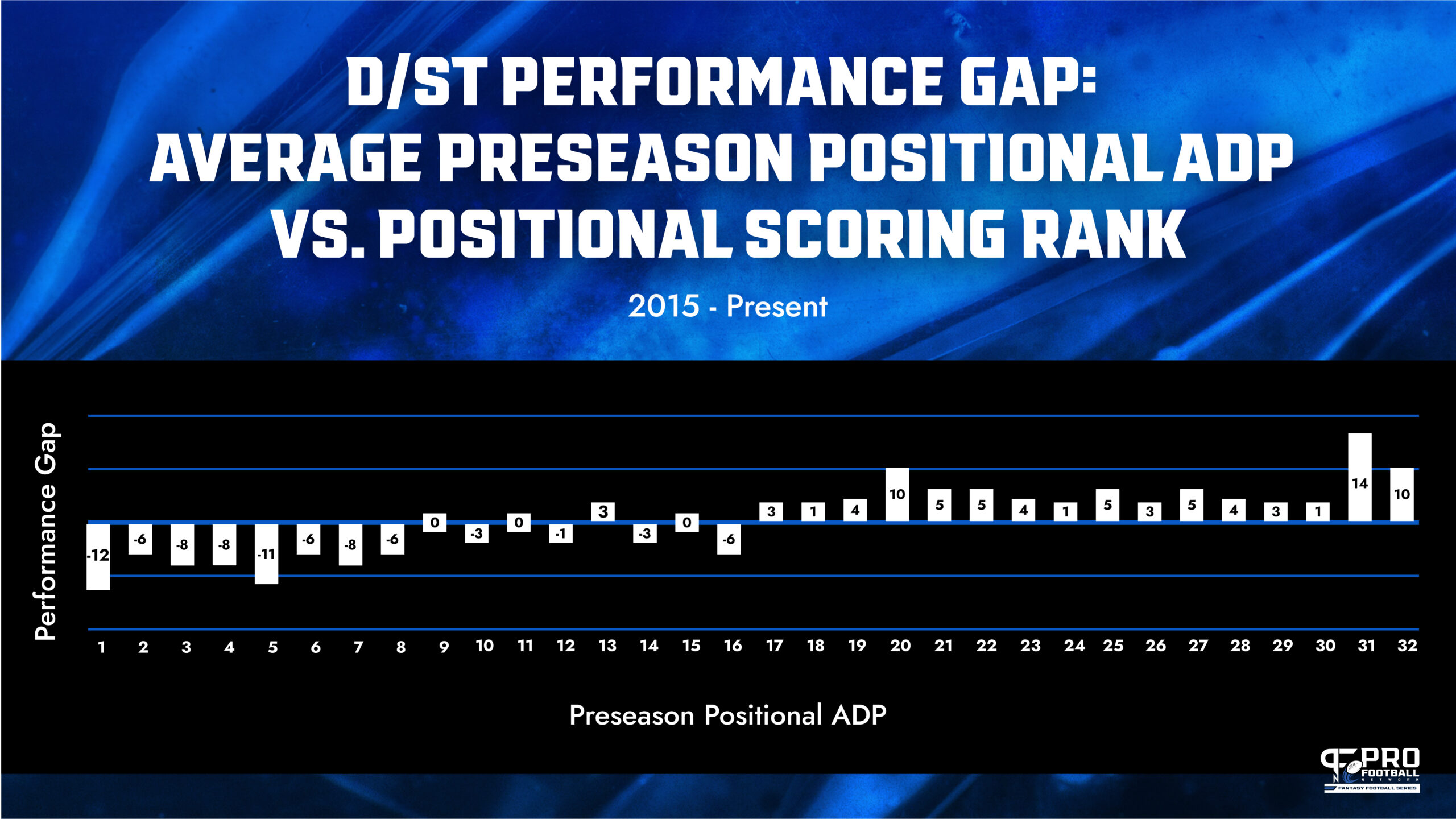 It might surprise you (it certainly shocked us) that the best-performing D/STs (compared to their preseason ADP) are D/STs 20, 31, and 32. That’s right, two of the three biggest fantasy surprises, on average, have come from the two worst-ranked D/STs.

Regarding DST20s, no other DST has averaged more points since 2015. You read this right: no other DST. Not DST10s. Not DST5s. Not even DST1s. That doesn’t mean you should target the 20th-ranked D/ST in drafts. On a micro level, there is randomness here. But on a more macro level, on average, all of the non-top-16 D/STs have performed better than market expectations. All of them. Every single one. And only one of the top 16 has performed better (D/ST13s).

This isn’t randomness, and it isn’t just about top-five D/STs versus top-6-10 D/STs. It’s the intersection of flawed market valuations and fantasy realities. It requires us to either ignore what’s staring us in the face — or use it to our advantage.

Looking for more insight? Check out our ADP vs. Age vs. Performance research here.